Discuss your gear and stitching and shoe modification in here.
Post Reply
114 posts

I wrote this whole thing up and then my computer crashed and I lost it all..
Here I go again!

Some people choose not to mod this shoe at all, that works for them but I would rather dip my face in bubbling acid than waste my time shredding in an unmodded shoe that has so much potential.

Here is how the shoe looked when I started: 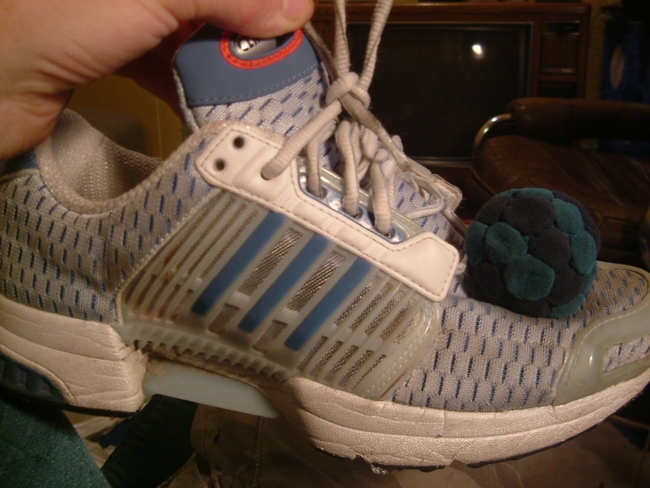 I started out by doing a nice healthy Broka mod: 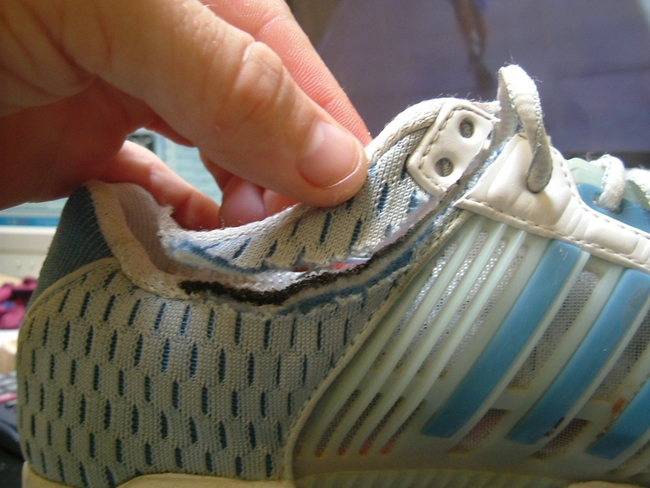 And then I stitched it back together for clean edges: 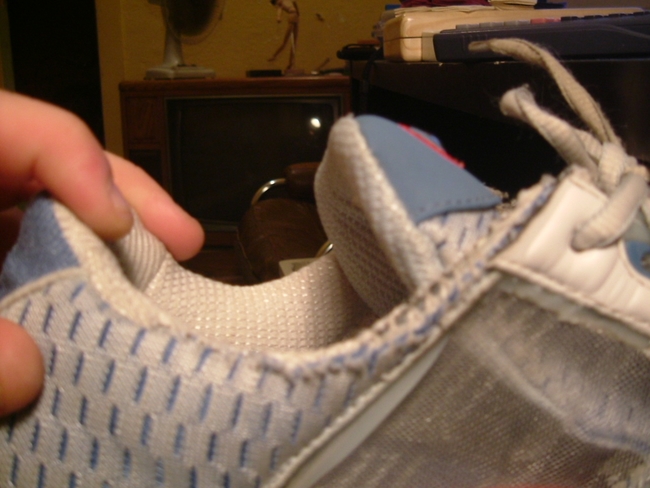 The next thing I did was to make the toe area go from suck to incredible by doing the following:

You have to cut out the center lace loop. I don't have a picture of my shoe with this piece still there, but if you have a clima to look at, it is the one thing that is stitched to the toe mesh.

That opens up the toe area significantly.


The choice one makes regarding how to deal with the inside area ranges greatly among climacool users. Many of the top clima shredders choose to do nothing at all with the plastic fins (Mikko, Matt Cross, Andrew Grant) but there are a few options for the more adventurous!

I have had success in the past with using a dremel (rotary grinding tool) to grind down the fins to just very thin strips of rubber. They provide feel and grip.

On my latest pair I did what I had dreamt of doing all along. It took me over an hour of grunting and expending energy but I managed to pull all the fins right off the clear mesh that they are attatched to. I used a pair of pliers and LOTS of effort, but it worked. You have to slit the stripe with a sharp knife at the top, being VERY careful not to cut through the clear mesh!!! Then you grab the stripe with a pair of pliers and pull and it should come off in one smooth pull, the stripe will actually pull right off the mesh cleanly.

I do not recomend this mod to anyone that wants to avoid hard work to get what they want.

A warning to anyone crazy enough to actually try the stripe-pull-off mod, the front-most stripe on a climacool 1 is stitched down, you will have to try to cut them from above so that when you are ripping off the stripe the stitches don't tear the mesh. I tore mine a little, but that is okay, I have had holes in the mesh in all of my previous pairs of climas and they don't run, don't worry.

Here is how effing choice my inside area came out: 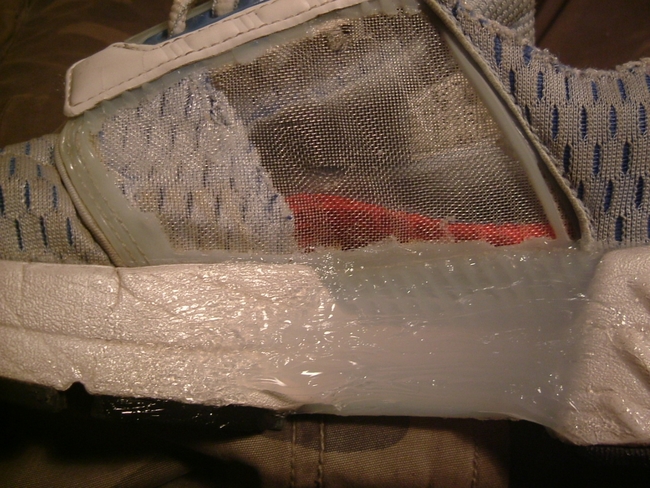 To fill in the gap in the arch I used clear silicone caulking. I just squeezed it out into the cup and then using smooth strokes with my finger I shaped it into the insert I desired.

The last thing I did was to change the lacing of the shoe.
There are several lacing options, however a new one is currently being pioneered by Matt Cross and I.

Check it out, mega toe:

It's pretty hard to argue with THAT toe area isn't it?
Also, it is CLEARLY a much more significant landing area than on my laver!

I painted my shoes once all the mods were done and here you have my fully modified Adidas Climacool Original: 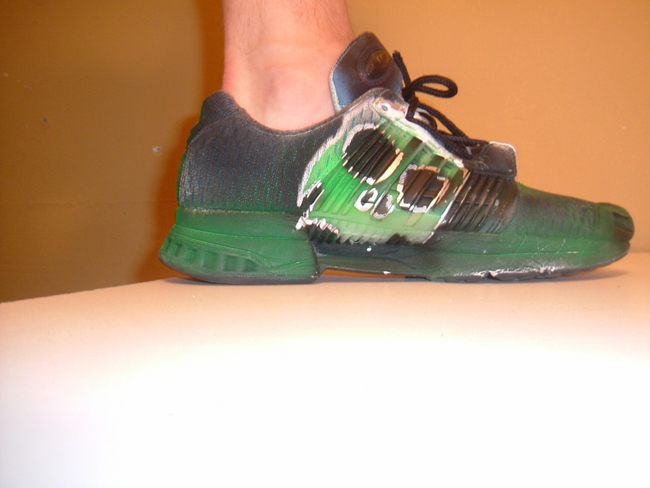 Oh, and for comparison I took a shot of the curve of the inside arch of the clima vs a laver: 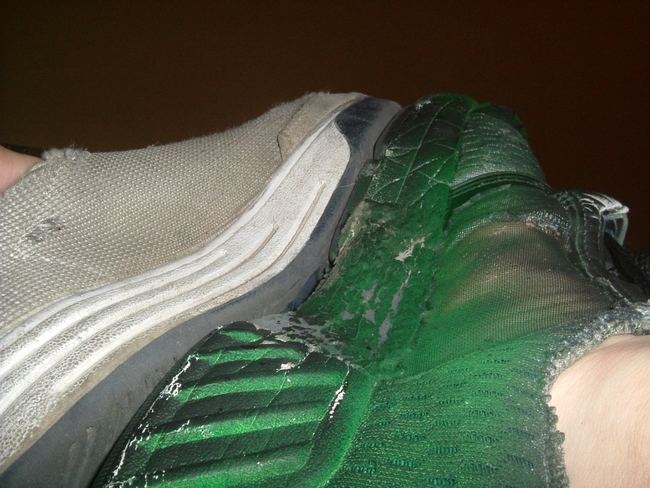 The curve is actually identical, thus the transition between shoes is rather seamless.

I hope this modification tutorial helps bring clarity to this topic.

**Note** If this has inspired anyone to go out and buy a pair of climacools I must warn you in advance. You want to aim to have the shoe fit SNUGLY!!! if it is too big then you will HATE the toe area and be mad at me for "misleading" you, when really it would be your fault for not reading this disclaimer that explains what to do.

If you wear (for example) a size 9 laver, get size 8 climacools. Okay? deal.

Also, the "correct" climacools to get are these and only these models:
- Climacool 1 aka Climacool Original
- Climacool Euro
Those two are the shoe that is played in by all of the prominent climacool shredders with the exception of Jason Crook who plays in Climacool 3's, which I have not yet tried.

I have looked at pictures of the 3 and from what I can see they have lots of potential however one would have to try them to find out.
Last edited by mosher on 06 Jul 2005 09:59, edited 2 times in total.
Tom Mosher

hate is a waste of passion!
Top

Mosher, you are a saint to all Climacool owners.
Im not one of them so your just "Tom" to me, but great tutorial anywho

I told you how helpful it is on MSN. your shoes are choice!

JSACK wrote:alright well me and obara'bars, shredded our dicks off, since we are both in high school, obviously there is some sort of talent show

Hey Mosher, I actually managed to circumvent the issue of wanting to make the toe area bigger by doing a nice little mod to it (of course I still did, because I'm cool like that). It involves removing the top layer of fabric. What really kicks ass about this mod is you can choose exactly where to do it as the two layers of fabric are held together by a ton of tiny bits of thread. Thus, you can be very specific in where you want to have a better toe. How is it better? Well, not only is the fabric more grippy but the little bits of thread add to the grippiness. So you've got one grippy piece of incredibly thin fabric to stall on. It's very much like a sock.

Btw, Sticky this.
Jamie Willison
My Footblog
<<One of the Only Hackers in the UK>>
Top

hey tom...me too told u how i think...but i want to shout it out in the whole world!

this is an awesome tutorial,and those shoes of u look so great,colorways ect...and u made me want a pair of cc

but this will take a bit of work to find some...

thanks for the help! i need to get some clima 1s but dont "mislead" everyone, the climacool responses work just fine with the above modifications, im gonna try removing a layer of fabric, its an idea i had a while ago but hadnt tried because i wasnt sure that they were seperate layers of fabric, ill post here later to let y'all know how it goes for the responses.

Paul, I didn't recomend the response's because there are like 90000 different models of Climacool Response and only one of them is any good for footbag.

I didn't want people going out and getting one of the models that don't work.
Tom Mosher

hate is a waste of passion!
Top

If you like the Climacools, I also recomend checking out the New Balance 890. No modding needed. You can find a pic of them on the Sportmart site.

i understand, and unfortunately i cant get a hold of clima 1s at the moment, but i have to say, i just did that fabric modification and ill tell you, these are fucking sweet too.

i think they work, if there is anyone else out there with responses (ill find out which model i have to eliminate confusion), tell me what you think too.

blackcrown wrote:If you like the Climacools, I also recomend checking out the New Balance 890. No modding needed. You can find a pic of them on the Sportmart site.

you´re talking about this ones?

i´m no pro-shoe-moder,but in my opinion you need to mod them a bit...at least cut off that dumb N...and i guess cutting away a bit from those stringloops would be nice too...
come get your mÃcrÖ¶ bag today
buy one of my bags and help finance my guitar lessons

how about the fact that those are terrain shoes, i bet they weigh a ton, and look at the sole, thats like riding a mountain bike on a road. way more ground friction than needed, and that sole looks like 2 inches thick, basically they look unplayable, but if you have them, write up a write-up (haha repetative redundancy)

I really do think climas are pretty damn ugly, but its not really about that

This is a very well put together tutorial and will be usefull to many new players. I hope you don't mind me stickying it Tom.

mosher wrote:Paul, I didn't recomend the response's because there are like 90000 different models of Climacool Response and only one of them is any good for footbag.

I didn't want people going out and getting one of the models that don't work.

The one model of the Response that does work is almost exactly like climacool 1's. I believe they are the first model.
The East Coast Kick
Selling footbags.
Top

.. I found some responses and they were SHIT
Top

I guess this is the reason Tom doesn't recommend Responses.

I have them, they work fine, but I guess they're hard to find the right ones. I will leave it at that.
The East Coast Kick
Selling footbags.
Top

i have 2 pairs of the same model of responses right now, and i think they work beautifully, ill post some pics post-haste.

Yeah those are the ones. I suppose you could take the "N" off but it doesn't bother me. They are very light weight. The insole isn't cut out so there is no need for shoe-goo. I'm not saying they're the best shoe ( I prefer my New Balance CT300's) but if your the type who like Climacools I suggest you check them out, I think you will be surprised by how shreddable theses shoe are. And yeah the sole is a bit grippy.